Jerry is disgusted when he finds out he was eating pecans that were just in his girlfriend's mouth. George finds a doodle that his girlfriend drew of him. Kramer is eating some tasty peaches that come in season for two weeks every year. Fleas force Jerry and his visiting parents out his apartment. Elaine has an interview with a publisher that has suite of rooms at a fancy hotel and that is where Jerry parents get to stay. Jerry stays with his girlfriend. Elaine must go into Jerry's fumigated apartment to get an unpublished manuscript that she is supposed to read for her interview and she can't find it, but Kramer read it in Jerry's apartment and the gas causes him to lose his sense of taste. George finds out that his girlfriend really doesn't care what he looks like. Jerry figures out that Newman gave him the fleas. Meanwhile, Jerry's parents, Uncle Leo and Nana live high on the hog at the hotel. 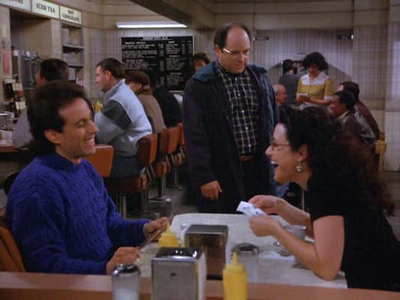