The murdered body of an elderly drifter is found near the docks with a whiskey flask clenched in his hands. It looks at first like another drunk has met an unkind fate. But, when Ogden determines the victim had the liver of a teetotaler, Murdoch inspects the whiskey flask and finds a secret compartment containing what appears to be part of a coded message. The case takes an even stranger turn when a man identifying himself as the dead man’s son comes to the morgue to claim his body. Investigations lead to political conspiracies being uncovered and a far bigger case is on their hands than first expected. 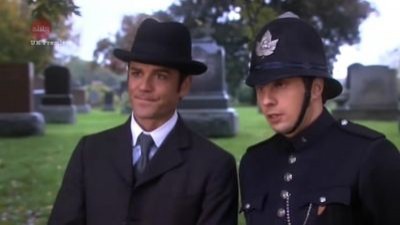