All Beths Are Off

While having lunch with Megan, Jennifer hears Kyle's voice. She slaps him. Kyle visits her at the beach house, and apologizes for the way he broke off their Boston affair. Michael throws Jennifer out after learning about the affair, and that she has dropped out of school. Amanda and Kyle find the space for their jazz club, but Amanda isn't sure she should get involved with him after hearing of his flings with Syd and Jennifer. Sam's father refuses to leave town, and extorts more money from her. Denise convinces Chelsea to keep a diary as evidence against Matt. She takes notes when a male friend who has just lost his lover to AIDS spends the night on Matt's couch. Craig and Sydney draw closer. He chases away a private investigator hired by Amanda to spy on Syd. Billy is alarmed to learn that Alison is drinking, but Jake isn't concerned. Alison gets fired after drinking and causing D&D to lose a client. She and Jake decide to adopt. Michael pledges to help Taylor after learning of Peter' 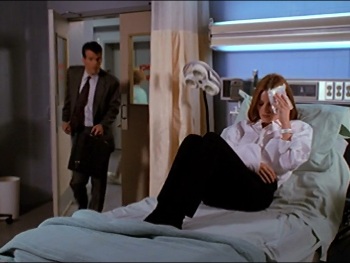