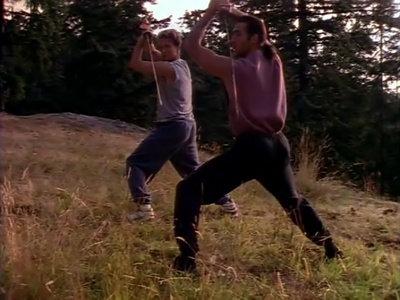 Eye for an Eye

When MacLeod and Richie are witness to a terrorist attack on an Ambassador, Richie dives in like a Superhero, cocky with Immortality. In the resulting confusion, one of the terrorists is killed, and another, Annie Devlin, an Immortal, is captured. She swears revenge on Richie, and when she escapes from custody, MacLeod takes on the task of educating Richie so that he will have a chance in combat against her. Meanwhile, Flashbacks reveal an earlier friendship between MacLeod and Annie. Mac renews the friendship, and the two Immortals who have both recently lost their lovers find solace in one another. In the end, Richie defeats Annie but can't bring himself to kill her, and MacLeod convinces her to pursue the blood debt no further.