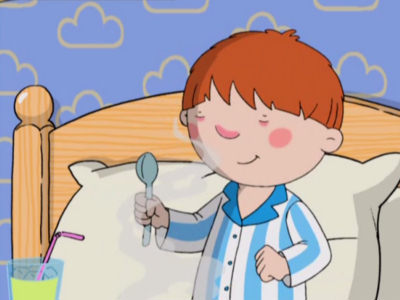 Harry has been in bed the past few days with a bad cold. When Charlie shows up outside, he wants to go out and play, but is caught by his Mom after he sneezes. Harry is worried he's just going to be stuck in bed, but then decides he could have fun in Dino World. The dinosaurs think this is a great idea and so they all jump in. At first, everyone has a great time just romping around. Then, the dinosaurs all start coming down with strange ailments. It seems they've caught Harry's cold, but it's manifesting itself in bizarre ways in each dinosaur. Harry is very upset he caused his dinosaurs to get sick and vows to care for them.