Quatrain 32, Century 9: "The fish that travels land and sea will be cast up on shore by a great wave / And pestilence from the sky will drive multitudes into the ocean." I seek them. I hunt them. I will stop them. Since my crusade began, I've destroyed an alien cloning lab, ruined their disinformation campaign to discredit alien existence, and taken down a cult that sought an alien salvation. But the trail was growing cold. For three weeks, Crazy Eddie had been studying Nostradamus quatrains to lead us to the aliens. The only lead he found was a newspaper clip about a farm in Indiana claiming to have a large mouth bass that breathed on land. It seemed to fit with the quatrain. Eddie thought I was wasting my time going after a fish, but I had him make up some snappy credentials for me as a tabloid reporter for the World Standard News anyway. I thought it was time to go fishing. I met Esther and her little brother Cody on their farm and inquired about the fish. 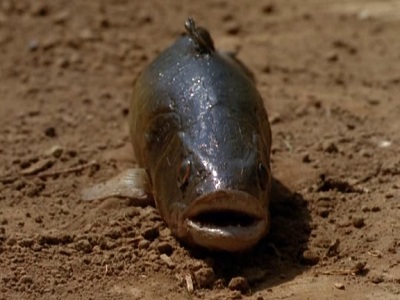