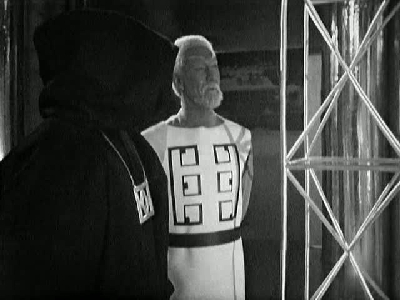 The Daleks assemble the leaders of several alien empires, apparently intending to unite them in an Alliance which will then declare war on Earth. In fact, each empire has brought components or technology which the Daleks require to construct the ultimate weapon – a Time Destructor. The last component they require is the power source, a core of the rare element Taranium – and Mavic Chen, the Guardian of the Solar System, intends to supply it to them and then betray them, seizing the Time Destructor for himself. The Doctor and his companions stumble into this affair when the TARDIS materialises on Kembel, and with the aid of Space Security Service agent Bret Vyon, sent to investigate the disappearance of Marc Cory, the Doctor steals the taranium core. The Daleks pursue the Doctor and his companions across the galaxy to get it back, and in the course of the flight the Trojan handmaiden Katarina gives her life to help the Doctor escape from a vicious criminal.