The story begins with the Doctor and his three friends, including new girl Vicki,in the year 64 AD enjoying a holiday at an Italian villa But the Doctor gets bored and sets off to visit nearby Rome, taking Vicki with him. While they are away, Ian and Barbara are captured by slave traders. In Rome the Doctor is mistaken for a musician and is asked to perform at Emperor Nero's Court. The Doctor, however, can't play a note and has to come up with elaborate schemes to avoid revealing this!!. Ian becomes a galley slave, while Barbara is sold to Nero's slave buyer Tavius at an auction in Rome. Ian and another slave escape from the galley when it is wrecked in a storm. They make their way to Rome to try to find and rescue Barbara but are recaptured and forced to fight as gladiators in the Arena. Events climax when, by accidentally setting fire to Nero's plans for the rebuilding of Rome, the Doctor gives him the idea of having the city burned to the ground. Nero plays the lyre while Rome burns, and the Doctor, Vicki and a now reunited Ian and Barbara go back to the villa. 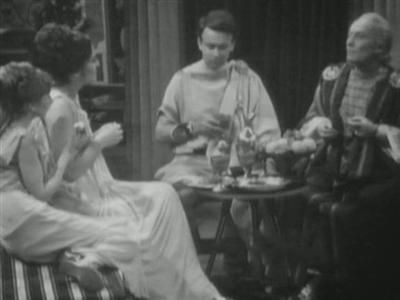