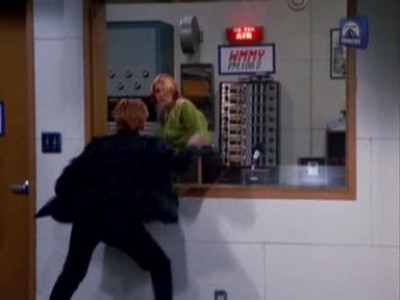 Caroline and the Quiz Show

Annie's been dating Seth Rudetski for six weeks now, and he's decided it's time for her to meet his parents, an intellectual couple who run ""Nothing Trivial,"" a quiz show broadcast to colleges on public radio. They turn out to be big fans of Caroline's strip, and persuade her to appear as a celebrity contestant - a decision that revives her childhood trauma (seen in a flashback) of freezing under the pressure of a state spelling bee. While Del and Charlie try to coach her through her anxiety, she appeals to Richard - and Julia steps in with a solution of her own. Meanwhile, Annie's feeling pressure of a different sort: from the excessively close relationship between Seth and his doting parents. (.)