When the Baywatch gang has found Beverly Lowry, Gordon Lowry's wife, dead in the water, Stephanie is convinced that they are dealing with pirates, but Mitch and Garner doubt that. Then Mitch and Stephanie get a yacht from one of Stephanie's friends and acts as a newly wed rich couple named Trevor and Lilly van Tress. There is a man in the marina named Fred Adler who meets all the couples and he has the information of who is rich and who isn't. Garner and C.J. follow Mitch and Stephanie in the scarab when they sail off with their yacht Venus. Garner becomes seasick and tells C.J. to slow down. When Mitch and Stephanie are playing the role-play, thy get attracted to each other and almost makes love. But they are interrupted by Fred Adler and the pirates who have just arrived to their yacht. Meanwhile, C.J. is forced to do a rescue and transport the victim to shore. Then Garner takes another boat but boards the wrong yacht. Then Mitch is forced to go to shore and get all their money. Mean 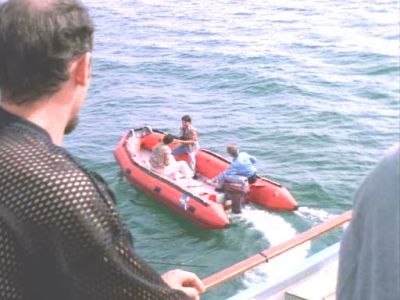