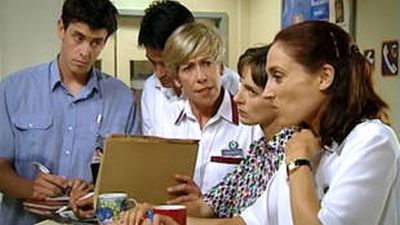 Bron's favourite patient Bob Parkin is back in the ward with pneumonia. He is stunned and disbelieving when told his illness is probably HIV related, and he refuses to have an HIV test. Nor is he forthcoming on the possible source of the infection, and Bron suspects he genuinely doesn't know. Bron makes it her personal mission to convince Bob to have the test, so he can take advantage of the latest therapies and treatments. However, her job is not an easy one as he has adopted an ostrich approach. Bron learns about Bob's long lost ex-lover and sensing she might be able to shed some light on his illness, tries to track her down. Meanwhile, Luke assists in performing a laparotomy on Margaret Quinell. She has several tumours and the consultant is convinced it is terminal cancer. Luke is ordered to break the news to Margaret, even before the results of the biopsy come through. He's surprised however, when Margaret is philosophical about dying, as it means she can join her late husband. Margaret's estranged son David turns up at the hospital unexpectedly, after having lost touch with his mother. Connor finds himself treading a difficult path as he cares for Margaret and tries to help David reconcile with his mother before she dies. Jared is dismayed and angry to find out that Angie is back in the ward. She fell over following an overdose and has a cut to her head. Dr. Wu tells her that he has contracted Hepatitis B and C. In addition to his normal duties, Jared takes care of Angie. However, he takes things too far when he invites her to stay with him and Connor upon her discharge from hospital.